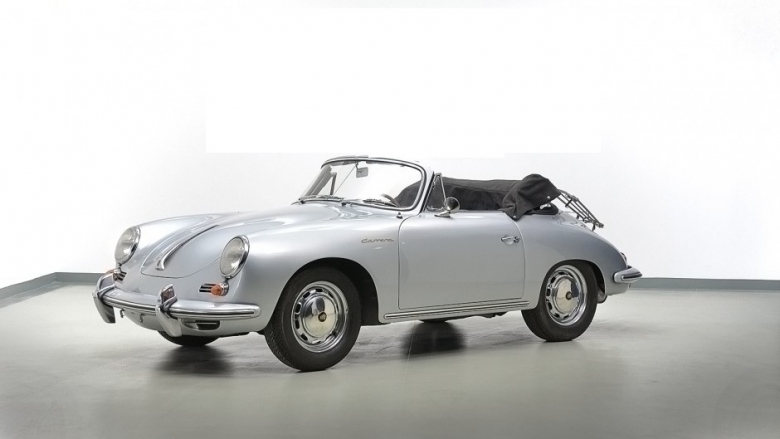 The Porsche 356 was the company's first production automobile.

The 356 was created by Ferdinand "Ferry" Porsche (son of Dr. Ing. Ferdinand Porsche, founder of the company). Like its cousin, the Volkswagen Beetle (which Ferdinand Porsche Senior had designed), the 356 was a four-cylinder, air-cooled, rear-engine, rear-wheel-drive car utilizing unitized pan and body construction. While the 356's body was an original design by Porsche employee Erwin Komenda, its mechanicals (including engine, suspension and chassis) were derived from the Volkswagen. The first 356 was road certified in Austria on June 8, 1948, and used many Volkswagen parts for manufacturing economy. Quickly though, Porsche re-engineered and refined the car with a focus on performance. By the late '50s many fewer parts were shared between Volkswagen and Porsche. The early 356 automobile bodies produced at GmΞ“Ξnd were handcrafted in aluminum, but when production moved to Zuffenhausen, Germany in 1950, models produced there were steel-bodied.

By the early 1950s the 356 had gained some renown among enthusiasts on both sides of the Atlantic for its aerodynamics, handling, and excellent build quality. It was common for owners to race the car as well as drive it on the street. Increasing success with its racing and road cars brought Porsche orders for over 10,000 units in 1964, and by the time 356 production ended in 1965 approximately 76,000 had been produced.

The basic design of the 356 remained the same throughout its lifespan, with evolutionary, functional improvements rather than annual superficial styling changes. Nevertheless a variety of models in both coupe and convertible forms were produced from 1948 through 1965. It is estimated approximately half of the total production of 76,000 356s still survive.

Cabriolet models (convertibles) were offered from the start, and in the early 1950s sometimes comprised over 50% of total production. In 1959 the 356B "Roadster" convertible replaced the D model but the sports car market's love affair with top-down motoring was fading; soft-top 356 model sales declined significantly in the early 60s. Today these early four-cylinder models are highly coveted by collectors and enthusiasts worldwide.

Interested about our Porsche 356 B Cabrio? use the form below and we will get in touch